COVID-19 and Women in the Workforce

It is very difficult to juggle being a parent while working from home in the same space as your child, who is stressed out or frustrated with online learning, in addition to the social emotional piece with not being able to have playdates with friends.

Parents have also had to figure out childcare to support their children in their own home. Many people don’t think about how hard it is to work a full-time job and parenting through a pandemic. You have children with computer and Zoom connection issues—while in the middle of an important meeting. What if you are a parent who is a frontline worker or a single parent with no childcare? Thanks to GSWS [Gender, Sexuality, and Women’s Studies] and Penn, many parent employees were offered a grant to subsidize these costs, but unfortunately, many other women have dropped out of the workforce or become unemployed. Women’s jobs are more vulnerable and women are leaving the job market with increased childcare burdens.

I have spoken to many parents who find it hard to grab a bite to eat, who many, many times skip lunch and don’t eat until the end of the day because of their own back-to-back Zoom meetings and childcare responsibilities. Graduate students have to shoulder writing dissertations without having a change of scenery when they hit writers’ block; other folks are also struggling to produce research in order to earn tenure. 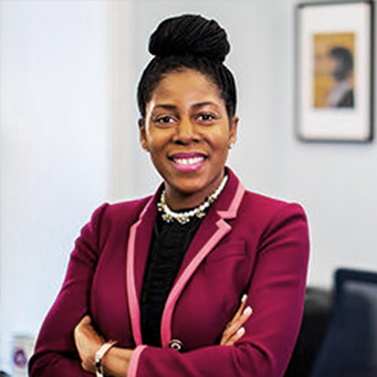 There is also the health component. Reproductive health service appointments were canceled or delayed because of the pandemic. Women are also at greater risk of domestic violence.

Giving grace to other people and having grace for yourself is the most important tool through this pandemic.

Sherisse Laud-Hammond is a modern-day pioneer at the University of Pennsylvania. She’s the first Black woman to lead the Penn Women’s Center, one of the oldest women’s centers in the country.

It was founded in 1973, and for more than 40 years the organization has been at the forefront of women’s rights.

“I’m the first but that’s because of many firsts before me,” Laud-Hammond said. “I think of Sadie T. Alexander, who was the first woman to graduate from the University of Pennsylvania Law School.”

While the center remained closed during the pandemic, she kept the mission going virtually.

Through Zoom, the women’s center conducted various psychological, financial and legal workshops. Laud-Hammond said it was also an outlet where students, staff and the greater community could have fun during a challenging time.

Penn Women’s Center held cooking workshops and even webinars that focused on meditation. It also served as a bright spot for new and expecting mothers. The center offers help for everything from breastfeeding workshops to childcare advice

But Laud-Hammond said one of the biggest focuses during the pandemic has been the gender wage gap. She said right now that issue is crucial when unemployment has significantly impacted women the hardest.

Penn Women’s Center has also focused a lot on the racial divide throughout the country sparked by the death of George Floyd. Laud-Hammond said the center continues to serve as a safe haven for everyone.

“With inclusivity that means intersectionality, and so whomever comes to our doors, this is a brave space for them, where their identity is never questioned,” she said.

Laud-Hammond has been on the job for a little more than two years. She said, in her eyes, being able to help others has always been a passion.

She looks forward to serving more of the community in the future. The Penn Women’s Center is about to undergo major renovations, which she believes will attract more people to their mission.

2021 Women of Color at Penn Awards

On March 19, the Women of Color at Penn honored the award winners whose work has promoted education, cultural diversity, and positive change on campus and in the world. The Staff award went to Sherisse Laud-Hammond from the Penn Women’s Center.

Sherisse Laud-Hammond is the director of the Penn Women’s Center (PWC). In this role, she supports students, staff, faculty, and all Penn community members through counseling and innovative programming related to women’s support and advocacy, gender equity, and interpersonal violence. Her exceptional leadership has transformed the physical space and the branding of the PWC to make it feel more welcoming. Her distinguished service has enabled her to positively affect the lives of students, faculty, and staff throughout the Penn family through increased programming.

Ms. Laud-Hammond has a longstanding record of being an effective collaborator at Penn, spearheading a Hurricane Katrina relief initiative, participating on the search committee for Open Mind for Africa, and advising students in multiple dual degree programs. A Philadelphia native, she is a longtime member of the Delta Sigma Theta Sorority and a board member of Inspiring Minds Greater Philadelphia, a nonprofit organization whose mission is to engage, inspire and empower youth to reach their full potential through education. Because of her contribution to the Penn and Philadelphia community, we recognize her with the Women of Color Staff Award.