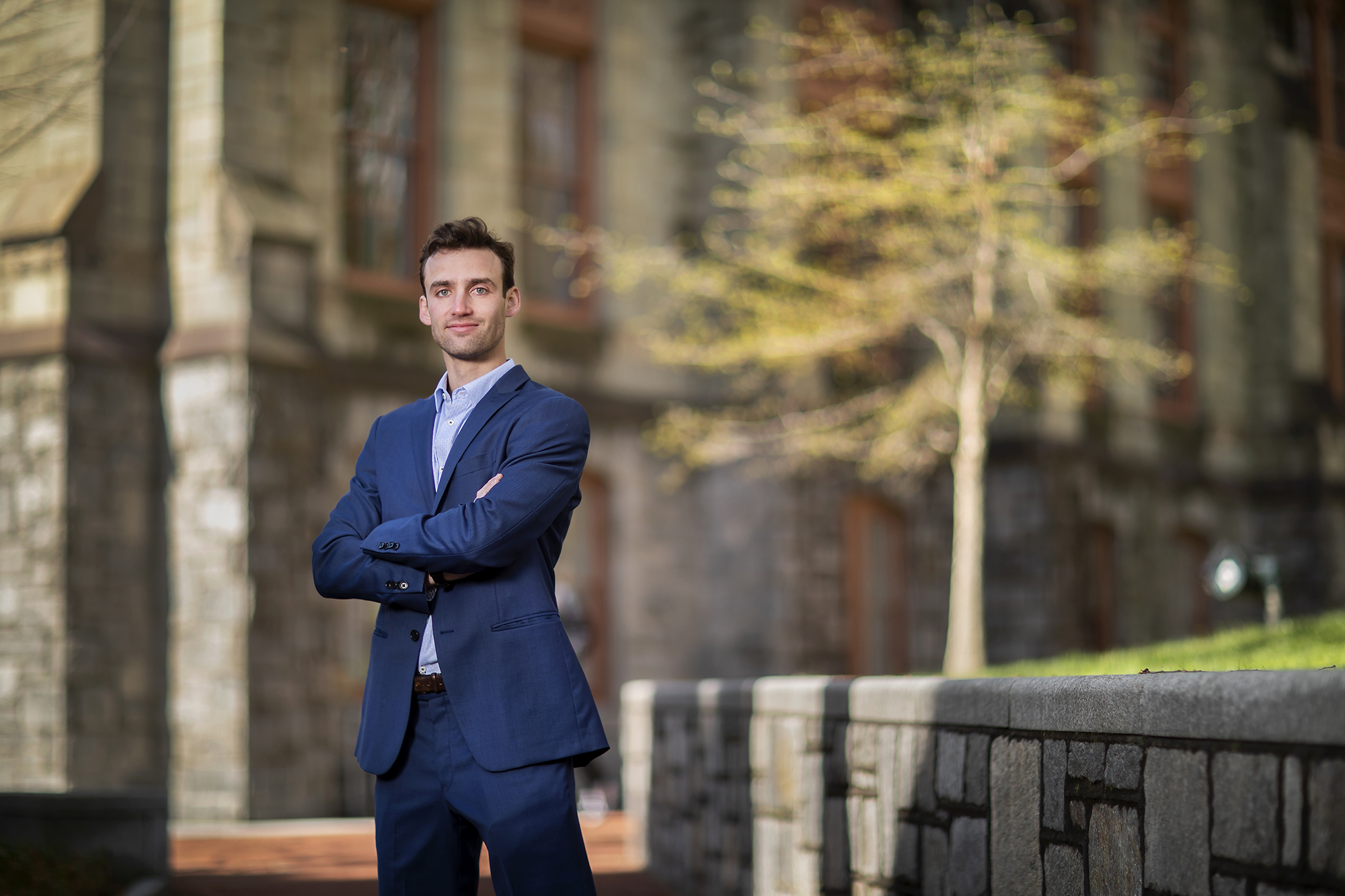 Projection and Pursuit: A Two-Fold Meaning of Longing

University Life shares the wisdom of Sam Strickberger, ’22 Class Board President and speaker at this year’s Commencement Baccalaureate Ceremony. Sam’s speech, Projection and Pursuit: A Two-Fold Meaning of Longing, is an inspiring reflection on pursuing your passion.

Penn is honored to have your energy and spirit. Congratulations!

I can’t believe we are here. The last-minute assignments. The early morning practices. The late-night rehearsals. The rush of Locust. We’ve made it. In less than a week, we’ll walk out of Franklin Field as graduates of the University of Pennsylvania.

But, before thinking about the future, I want to rewind.

Do you remember during NSO when all the gap year kids were talking about how transformative their past year was. And you were like: nobody cares. Well, I was one of those gap year students. And, if you’ll indulge me, I’ll briefly talk about my gap year.

Prior to Penn, I spent a gap year in Jerusalem studying ancient Jewish texts – practical right – with a diverse group of Jewish Israelis and Americans. It was a pretty privileged time. I had limited responsibilities and was immersed in a place of inherent spiritual meaning. One concept from the year stood out: the idea of longing, seeking to find my home in the world, pursuing my “why.”

I started Penn with the nervous excitement that fills much of NSO. It was then that I first encountered the three classic, introductory questions: “What is your name?” “Where are you from?” And finally, the loaded one, “What do you want to do?” I had no idea what to say the first time I was asked it. I thought I had the next four years to figure it out…at the least.

We were a bunch of newly admitted students, who recently wrote in our college apps about being “intellectually curious” at Penn. I thought we came here to begin to figure out an answer to that question. And so, during NSO, when I did come up with my own answers to it, they seemed forced. The question incentivized a predetermined path, maybe even closed-minded projections for the future.

I learned from my experiences in Penn and Jerusalem that there are two conceptions of longing. There is Projection and Pursuit. To project is to think in the concrete, the linear, the practical, that what’s-been-proven. It’s the you-in-ten-years that you create today. It is a business plan. The business of living.

To pursue is to think in the abstract, the creative, the values-based, the finding-your-why. Hearing the whisper of your inner child. It is an artistic creation. The art of living.

I want to give room for both. Not only because both are within me – and I imagine all of you. But because I deeply believe that both are crucial for success and flourishing. Projection without pursuit is an empty way to live; but pursuit without projection is unrealistic for achieving life’s goals, meaning, I imagine, we have to know how the world works, have the network, the skillset, the planning, to realize any big visions.

However, I think at places where we find ourselves surrounded by ambitious, brilliant people – places like Penn and likely where we are headed eventually – projection rules the day. So, today, I want to uplift pursuit.

In particular, pursuit is about the power and necessity of choice. “Man is condemned to be free,” writes Sartre, a twentieth-century existentialist. We are not free to choose, but we are free to choose, he argues. Did you get that? Neither did I. David Foster Wallace puts it more simply. “In the day-to-day trenches of adult life…There is no such thing as not worshipping. Everybody worships. The only choice we get is what to worship.”

And our apparent options aren’t all so great. Wallace continues, “if you worship money and things, then you will never have enough. Worship beauty, you will always feel ugly. Worship power, you will feel weak and afraid. Worship your intellect, you will end up feeling stupid.”

Worshiping something transcendent, on the other hand – things like justice, love, spirituality  – helps guide us. Pursuit is discovering that deeper “why.” And projection has its place too: it helps us achieve our pursuits.

Here are a few examples.

As a first-year, Maeve Masterson told me that she wanted to pursue climate justice and while at Penn she wanted to find the skillsets that would enable her to do that best. Four years later, she is still pursuing climate justice and through her education she’s planned – or, to use our terminology, projected – how to get there: she gained experience as a leader of Fossil Free Penn and studied environmental science and decision sciences. And she’s walking away from Penn with a masters in social policy to continue her pursuit.

I think about other students who pursued justice while at Penn. I think about Mary Sadallah, a dear friend and first-generation college student, who – as Vice President of the UA – distributed nearly $1 million to largely benefit first-generation, low-income students and students of color. I think about Niko Simpkins, who leveraged his love of engineering to encourage, support, and create space for marginalized engineers by reinvigorating the Underrepresented Student Advisory Board in Engineering. The list goes on. So, I’ll give you one more example. I think of Sam Pancoe who created the PennGenEq preorientation program to foster an inclusive space for all gender identities on campus.

These successful endeavors of our classmates – and many like them – taught me important lesson. Prioritizing pursuit, and letting projection follow it, is powerful. It can help us to access meaning and even success, however we define it. On the other hand, when projection comes first, when we take the road most traveled without examining it for ourselves, we risk losing track of what we care about most.

Still, valuing our “why,” our “pursuit,” isn’t easy. It’s hard and not always possible. It was uncomfortable telling people you were “undecided” as an underclassman. It was anxiety-producing to still be figuring out where to apply for an internship when friends had already landed their “dream job.” There is discomfort and anxiety in pursuit.

What’s the antidote? I honestly don’t know. But, I’ve drawn some insights from the actions of my twin brother, Max, and my roommate, Alan Jinich, as they took off from school last spring – when I sat through my zoom classes – to crisscross the United States and create an oral history of our generation’s covid experiences. Their decision taught me what Penn positive psychologist Karen Reivich confirms through her research. That perhaps pursuit requires three things. It requires gratitude for what we have, curiosity for what can be, and, along the way, favorable judgment for others. Pursuit also requires patience. Patience to wait, to reflect, to do things differently.

So, with the power of our education – our acquired knowledge, skills, community, and yes, that expensive piece of paper called our diploma – we are uniquely positioned for pursuit.

So, I challenge our great class to not get stuck in projection, in worshipping the rat race, the highest paying job, the most prestigious next step. I encourage pursuing our “why” and hopefully connecting it to something bigger than ourselves, something holy, something like justice. As Benjamin Franklin writes at the bottom of every PennToday email: “The noblest question in the world is: what good may I do in it?”

Given the nature of the Baccalaureate ceremony, I want to close with a blessing of pursuit, a blessing which randomly hangs from a corkboard in my childhood home and fittingly was delivered at another college graduation ceremony but in 1985:

“May [we be blessed] with discontent with easy answers, half-truths, and superficial relationships, so that [we] will live from deep within [our] heart[s].

May [we be blessed] with anger at injustice, oppression, abuse, and exploitation of people, so that [we] will work for justice, equality, and peace.

May [we be blessed] with tears to shed for those who suffer from pain, rejection, starvation and war, so that [we] will reach out [our] hand[s] to comfort them and to change their pain to joy.

[And] may [we be blessed] with the foolishness to think [we] can make a difference in this world, so that [we] will do the things which others tell [us] cannot be done.”

Thank you so much for listening. A huge congratulations on graduation. We’ve finally made it.