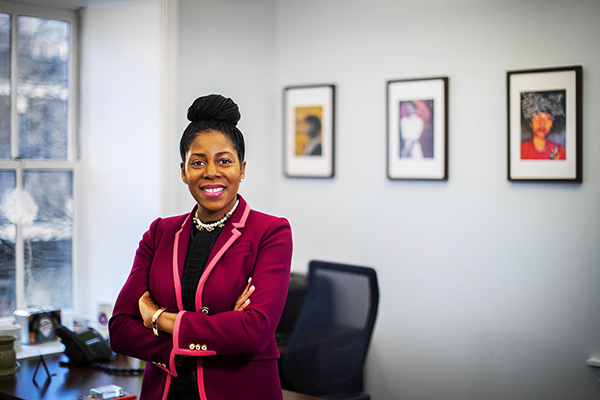 Sherisse Laud-Hammond is a modern-day pioneer at the University of Pennsylvania. She’s the first Black woman to lead the Penn Women’s Center, one of the oldest women’s centers in the country.

It was founded in 1973, and for more than 40 years the organization has been at the forefront of women’s rights.

“I’m the first but that’s because of many firsts before me,” Laud-Hammond said. “I think of Sadie T. Alexander, who was the first woman to graduate from the University of Pennsylvania Law School.”

While the center remained closed during the pandemic, she kept the mission going virtually.

Through Zoom, the women’s center conducted various psychological, financial and legal workshops. Laud-Hammond said it was also an outlet where students, staff and the greater community could have fun during a challenging time.

Penn Women’s Center held cooking workshops and even webinars that focused on meditation. It also served as a bright spot for new and expecting mothers. The center offers help for everything from breastfeeding workshops to childcare advice

But Laud-Hammond said one of the biggest focuses during the pandemic has been the gender wage gap. She said right now that issue is crucial when unemployment has significantly impacted women the hardest.

Penn Women’s Center has also focused a lot on the racial divide throughout the country sparked by the death of George Floyd. Laud-Hammond said the center continues to serve as a safe haven for everyone.

“With inclusivity that means intersectionality, and so whomever comes to our doors, this is a brave space for them, where their identity is never questioned,” she said.

Laud-Hammond has been on the job for a little more than two years. She said, in her eyes, being able to help others has always been a passion.

She looks forward to serving more of the community in the future. The Penn Women’s Center is about to undergo major renovations, which she believes will attract more people to their mission.